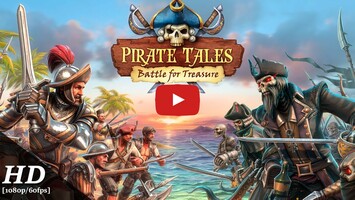 Advertisement
Pirate Tales is an action game with tinges of RPG-like play. Immersed in a world of pirates and buccaneers you're on the prowl for young blood willing to enlist in your wily pirate posse. Your mission? Sail the seas to make the world your oyster, crushing any opponent that dare cross your path while following your destiny to become the most terrifying pirate.

Combat systems in Pirate Tales are easy to learn but tough to master. When its your turn, basically you'll pick which enemy you want to attack and how to deploy your special tactics. Once that's done, you'll need to tap on your screen at precisely the right moment in order to time your attack to inflict max damage. If you manage to kill your enemy, you'll also get to pull off additional special attacks against your other rivals.

Levels in Pirate Tales are varied. Occasionally, you'll face off on firm ground, in jungles, towns or prisons, or (as might be anticipated) you'll defeat enemies on the high seas from the deck of your own pirate ship. As you complete quests you'll start to unlock new characters to play with. Though, initially, you'll only get a few characters, all in all you'll recruit up to 20 different people.

Pirate Tales is a jaw-dropping action game. Its graphics are simply spectacular and it has little to envy off of PC, console or other desktop games. Its game system is simple, but fun. Plus thanks to its immense number of characters to unlock and the variety of quests within its plot, you won't be running out of pirate adventures anytime soon.
By Erika Okumura
The 10 best Android games of the month [January 2018]

A new year is here and its bought with it loads of videogames for Android. Once again, we've compiled our monthly selection of the best games that appeared in January 2018. On this list, you'll find RPGs, action, and fighting games, just to name a few genres. Don't forget to check out our YouTube channel where you'll find all our monthly top tens, along with the gameplays of the best Android games.
See more

With arrival of the Pirates of the Caribbean movies came the return of one of literature's classic themes to the attention of people all around the world. Pirates were finally back in fashion, and since then they've remained consistently popular. There aren't many pirate games on Android, but Pirate Tales is seeking to change that. It's an RPG with enough interesting features to stand out in an extensive Android catalog.
See more